At the Beginning was the Ignorance and I had a lot of it.

Then I had to adjust the magneto to ensure the optimum performance of the engine. I already knew about setting the ignition from my car tinkering. The break pointer is set to 0.35, the test lamp is connected as usual, but it is illuminated all the time. So there was something different with this magneto ignition. Ok, then cigarette paper between the ignition pointers and the engine on top dead centre.

Where was the second identification mark of the pre-ignition before the top dead centre? Not there!

Ok let’s take approx. 15 mm. It was the same with my DKW Junior. Then I loosened the ground plate and turned it until I could pull out the paper. But now I could no start the KS 750 at all. Everything was totally correct, at least according to my logic and my knowledge about ignition timing. But the engine could not be started. My neighbour Heinz was a mechanic. He checked, turned, adjusted and the result was: everything is at its best. But the engine could still not be started.

There must be another problem.

So I got the carburettor down, dismantled and cleaned it and made unconsciously a new mistake when I put it together again. Somebody had set three-fibre seals below the float needle valve.

This does not make it denser, I thought. So I took the three seals off and put one good new one in. A new mistake was created.  After I had fixed the carburettor, the engine still did not start.

Then I remembered that I was taught at school how to read, from which I wanted to benefit now. UnfortunateIy, I could not find a solution in the manual for this problem. There were no other technical books at that time. Sometime later I talked to Heinz Pollmann on the phone. He is an old Zündapp-man who worked already for Adolf and his mates on Zündapp KS 750s in a garage at the front in Russia. His tip was ingeniously simple. Put everything together again as it was before. But really everything. That is what I did and the old jalopy ran again. The Englishman says: ’Never change a running system’. And how right he is! Especially if you have no idea of what you do!

Now I could drive once again. The engine consumed a lot of oil. Control the oil – what can go wrong with that? Oil dipstick out, wipe it clean, put it back and read it. Then pour in oil until the writing ’zu viel’ was covered. Done I thought. Unfortunately I had interpreted the ’I’ from the letter ‘viel’ as the indication line. I had actually ignored the correct line before. Because of that I had almost overfilled a liter of oil. The engine consumed the excess oil very fast and before it reached its correct level I had already refilled more oil. The result was never ending oil consumption and a wrong diagnosis:  The piston rings must be worn out. So I need new pistons. Where do I get them? No problem, somebody told me. There is a company in Italy that still produces them. They cost a lot of money but finally they came by post. I dismantled the cylinders and took them to a cylinder grindery. How much gap should the pistons have? I had no idea. They are new pistons! How much do they get today?

Approx. 3-4/100 mm are normal today, told me the master mechanic. Ok you do it, you are the expert. The first drive was to a winter meeting in the Sauerland. The bike travelled on a trailor. It was winter minus 10 ° C.  We drove with the bikes in a long column and were caught up in a traffic jam after one kilometer. Only after three minutes in idle speed, my engine had a jamming of the piston. These bloody pistons would have needed at least 10/100 mm piston gap to avoid a piston jamming. I learned this from some of the other attending Zündapp drivers. They had had similar experiences with these Italo compressor pistons. Back home cylinders off again and get them honed to auf 10/100 mm piston gap. Nothing jams now. But the oil consumption was the same as with the old pistons. I should only have measured correctly and filled in the right amount of oil. Then the oil consumption would have been better. Some time later I found out and today I am capable to measure correctly and refill the oil accordingly.

In the same winter we planned to visit a Crystal Rally in Norway with the Zündapp KS 750. We met at the ferry in Kiel from where we went to Oslo. Reinhold with a BMW R12 Wehrmachtsgespann, Herbert with his BMW 1000 with sidecar and a built on fork lift seat and me with my KS 750.

When we drove onto the ferry the clutch lever jump out of my hand due to thick gloves and there was an ugly noise in my rear wheel drive. I could not drive any more because the rear wheel blocked. But we could push the Wehrmachtsgespann backwards and that is how we got it on the boat.

Now we had 24 hours to repair it until our arrival in Oslo.

We took the rear wheel drive off and dismantled it. What I saw there did not at all lift up my spirits. Three teeth of the crown wheel were completely broken off and it had been a new crown wheel. As I found out later I had bought a crown wheel that was hardened too much.

It was two o’clock now. I called my company and explained my secretary how rear wheels drive looks like and where she could find it. Although it was old and used, it was still good. They sent it to me by airmail to Oslo. To be able to leave the ferry with my Zündapp we took off the broken crown wheel and assembled the Wehrmachtsgespann again. No problem to leave the ferry but then.

Oslo, temperature around the freezing point, freezing rain, icy roads and we had to take the Zündapp to our campsite at the Holmenkollen, approx. 10 km uphill.

In the evening the chaos in the streets had calmed down and I collected the rear wheel drive from the airport customs. No problems there at all. The next day we went from Oslo in the direction of Beitostølen, where we entered the real winter with roundabout minus 30°C.

It became a really lovely winter ride…… But that is another story.

After my return to Germany I put the KS 750 in the backmost corner of my garage and pushed forward my BMW R75 again.

As I had had some experiences with my ride and had learnt lot more, I made a decision. I did not want to make the same experience with the BMW as with my Zündapp. So I started to dismantle the R75 completely to take it back into operation again completely restored.

In spring I got the KS 750 out again because I wanted to attend a Zündapp-meeting in the Netherlands. The weather was pleasantly warm and this caused new problems. When the engine was hot I could not start it, not even with the hardest kick. When we pushed the Wehrmachtsgespann a few meters, the engine started immediately.

So we took off the magneto and changed the ignition coil. Changing at that time, in 1978, meant really changing. An old original part was exchanged against another old original part. So we still had to start the bike pushing it, or the engine had to be cooled down properly to start it with the kick starter.

The solution was a 6 Volt Honda double ignition coil, although now I always needed a charged battery. But I had that, because the generator worked always properly. Now I could start my Zündapp without problems. The engine ran very well and for half a summer I had a lot of fun with my Zündapp KS 750.

Every now and then the third gear jumped out. For me it was clear the shift forks were not adjusted correctly. I thought I could easily dismantle and adjust it. Today I know that the transmission works quite differently from what I imagined. And so it came as it had to come, the trial adjustment on my bike – without gauge and expert knowledge – ended with the fact that I could only engage one gear. This result was really very unsatisfactory. There was only one possibility left: Take off the engine and the transmission and dismantle the transmission. But now new difficulties became evident, because the teeth were affected from caries or other dental illnesses.  The trip dogs were not square but nicely rounded and some of the needles of the off road gear were missing. And the gear wheels staggered like drunkards on their bushes. It was depressing to see this precious scrap in form of a transmission. What now?

With melancholy I remembered my Seeley-Honda. Although it was only a speedy Japanese yoghurt cup, but also a great racing bike. At the push of a button a lot of power available and absolutely reliable. There was just driving – contrary to my Wehrmachtsgespann which made me know many a parking places to install a temporary moving repair site. Today I cannot quite remember the answers I gave myself to my own questions. But it must have been something like that there is no giving up as long as an unresolved challenge exists.

I also realized that I had approached the whole thing quite carelessly. So really I concentrated on the matter and started from the beginning. First I dismantled the BMW R 75 junk and assembled it with growing expert knowledge to a really operating Wehrmachtsgespann. With this well running BMW R75 I attended a lot of meetings with my wife and kids. I drove more than 30.000 km without any problems.

The first restoration of my BMW R75 took more than two years because I did not want to make any compromises any more. I had a large number of spare parts produced for myself because I could not get any good original parts. Nevertheless the transmission was not the best. So I did not dare to go on longer trips.

In 1980 a BMW transmission could only be repaired by people who possessed adequate original spare parts. I did not belong to these people at that time.

After that I approached the Zündapp KS 750 in the same way and we made a six weeks trip to Iceland with three Zündapp KS 750s. That was the breakthrough.

People in the scene slowly realized that you can travel very well and reliably with the Wehrmachtsgespann. The precondition is a reasonable restoration accomplished without compromises and with good spare parts. The result is a reliable Wehrmachtsgespann.

At that time I had a collection of nearly twenty Wehrmachtsgespanne. Most of them had not been restored.

As a hobby these Wehrmachtsgespanne are still interesting for me today because of their versatility. I began with tinkering, followed by restoration, weekend trips with the kids, many lovely travels with good friends, exciting off road trips, finding like-minded friends all over the world, to explore the technique and the historical background, to write books about these bikes. And last but not least in 1990 my hobby became my profession. 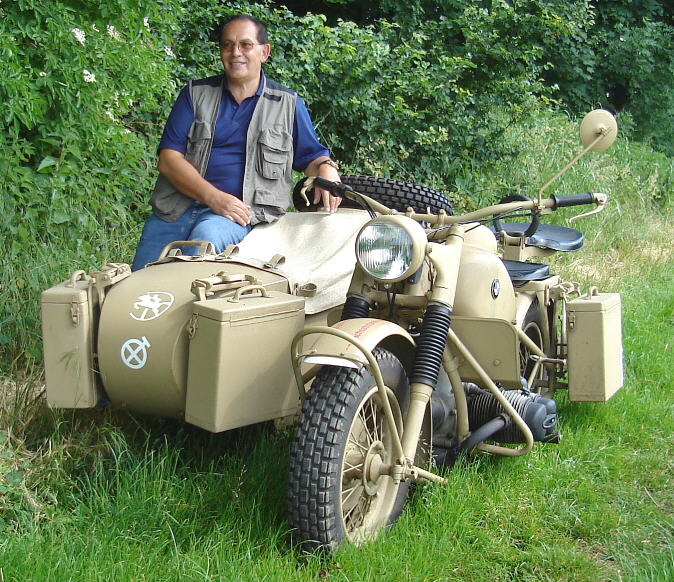 Our company - our team
a short overview